Uptown Players has a brand new home in the Design District 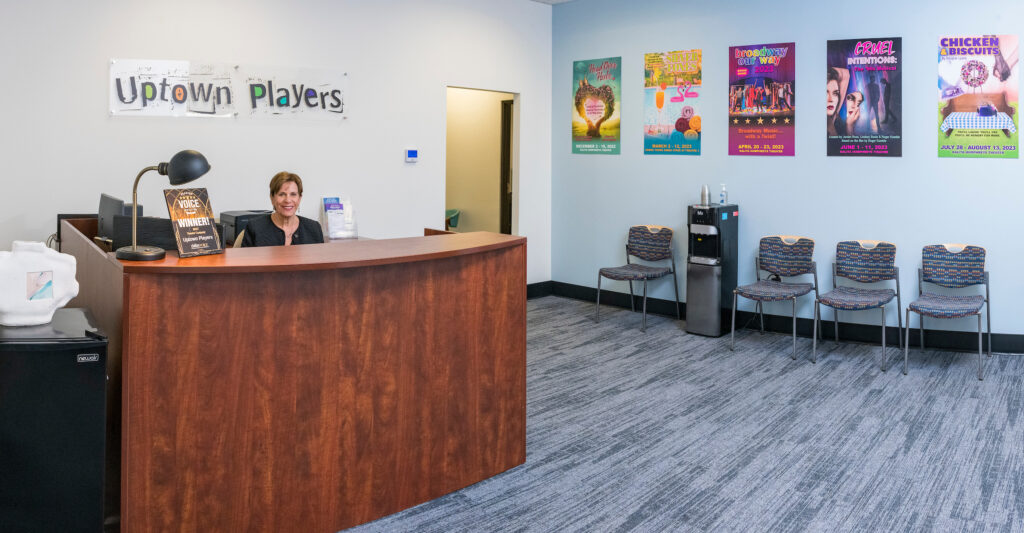 Uptown Players will handle its administrative and tech needs from its new home in the Design District. (Photos courtesy Uptown Players)

On Monday, Uptown Players released photos of its new administrative and rehearsal space located in the Design District. After learning its rent would increase at the Kalita Humphreys Theater, the theater company announced a capital campaign in June. The company will still perform shows at the Kalita but it had to consider a new economical location for its rehearsal space, box office and scene/costume shops.

“We always knew we would have to move our offices because there is a master plan being developed to restore the Kalita. In addition, the Equitable Access Plan (EAP), created by the Dallas Theater Center in coordination with the City of Dallas’ Office of Arts and Culture, has opened the Kalita to other arts groups, making it the right time to find new space,” Uptown Players executive producer and co-founder Jeff Rane said in a press release.

Uptown Players has resided in the Kalita since 2010 with seasons giving focus to LGBTQ stories and productions. They were the primary tenant of the building along with DTC’s continued use of the building (as well as the Wyly in downtown) for its own productions. Dallas Theater Center’s EAP plan will now open the building for rental by other theater companies and arts organizations to use the stage space.

With the help of Solender/Hall, Inc., Uptown Players found its new home at 1327 Motor Circle that gives them more than 3,922 square feet for its offices, rehearsals, costumes and set construction.

Originally set to lease the space, the company moved on with the option to purchase.

“Once we engaged Eliza, she asked the owners if they would be willing to sell the building, and she told us of the benefits of owning versus leasing. We realized that owning gives us more options, reduces operating expenses and builds equity.” Rane stated, “This building is in a great location, the right size and perfect for our current needs.”

Eliza Solender of Solender/Hall represented Uptown Players during the process.

“This building checked all the boxes. It’s centrally located in the Design District and near other creative businesses. Also, having the option to purchase it will give Uptown Players flexibility now and in the future. Plus, the area has its own association with management and security—unusual in the Design District,” she mentioned in the release.

At the announcement of its campaign this summer, the company had the goal to raise $350,000 by the end of September to move forward. Its ‘The Excitement is Building’ campaign raised the funds needed for the down payment and renovations.

“We thank all our donors, supporters and the community for their support,” Uptown Players’ executive producer and co-founder Craig Lynch said in the release.

Uptown Players’ new season will launch in December with Head Over Heels based on music by The Go-Gos.